FIND ME at IMTS  Dave Cave 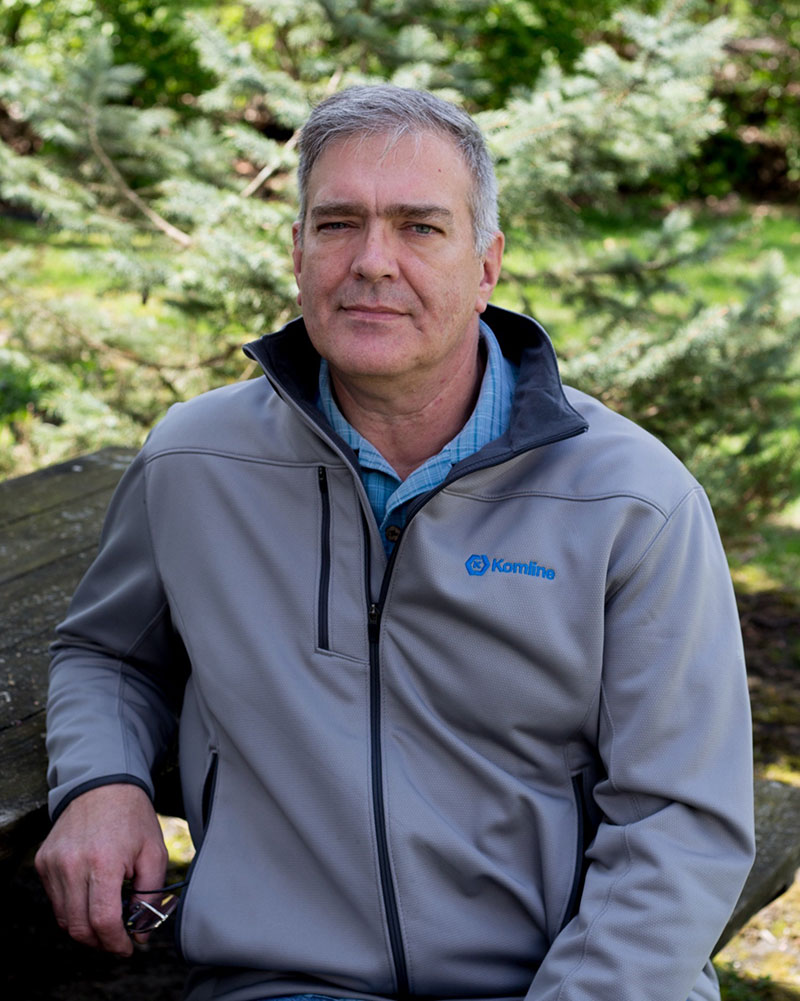 Komline Custom Machining, a 20-person job shop, can't afford a fleet of million-dollar lathes and mills. They can, however, buy used machines and retrofit them with new CNC controls.

What do a snack cake, ethanol blend fuels, and a paper receipt have in common? The answer is Dave Cave, senior technical advisor for Komline Custom Machining (KCM), a 20-person machine shop in Springfield, Ohio, owned by parent companies Fluid Quip and Komline-Sanderson.

KCM is a process equipment supplier for the physical separation steps in the corn wet mill processes and has also patented multiple technologies for the corn-to-ethanol dry grind process. Because of the relationship between industrial centrifuges and the 500-gallon mixing bowls used for industrial food production, KCM also machines the bowls for some of America's favorite snack cakes. If you pull into a gas station to fill up, grab a treat, and get a paper receipt, you've touched three items machined by KCM.

KCM has three boring mills with more than 10 feet of X travel and 90 inches of vertical travel, as well as five large vertical lathes.

When you start talking about large machining work, it doesn't mean a lot until you say a machine can swing 70 inches in diameter, adds Cave.

Cave's father was a toolmaker for International Harvester when he decided to do some side work. Starting with a mill and a lathe in the basement and then a rental space, his parents eventually founded Cave Tool & Mfg. in 1967.

I've been around machines since I was five,” says Cave. “I started by cleaning the shop and didn't actually run the machines until I was 10. I guess you could say I went to the school of hard knocks, because machining is all I have ever done since graduating high school in 1980. I enjoy the creativity of producing stuff.”

After 45 years, Cave's parents sold the business to its largest customer, Fluid Quip (an integrated biofuels company), which was acquired by Komline in 2021. Through it all, Cave has stayed on and taught employees how to machine stainless steel and Ferralium 255 (a duplex stainless-steel alloy) using large boring mills, the company's niche.

Cave notes that this isn't just a job to him.

When it comes to the CNC retrofits, I'm hands on. I put the controls on the machines and do the programming. It's what I do for fun, he says. You have to know what you're doing because you can't scrap a part. A mixing bowl costs $50,000 before we even touch it.

For someone at the tail end of his career, the irony of teaching young people how to use controllers is not lost on Cave. Back in school, you asked yourself if you will ever use trigonometry, says Cave. Believe it or not, we use it every day here.

Throughout its history, KCM has been a small company. In order to acquire large machines from companies such as Cincinnati and Giddings & Lewis, the company looks for values at auctions.

We purchased one of our 10-ft. boring mills for $35,000, says Cave. If we bought it new, it would cost $1.3 million. As a one-shift shop, that makes it tough to stay competitive. That's why we buy used and have retrofitted several of the machines ourselves. I have a FANUC control for G&L machine sitting on my desk right now.

We need the accuracy of modern CNC controls because machining a centrifuge is all complex contour cutting, says Cave. In some cases, we upgrade controls so we can control two spindles, add a rotary table, or upgrade to more graphical programming. In addition, if a part needs good finishes, you used to have to take it to another machine. Now you can complete things on one machine with the right cutting tools and the right controller.

You Never Know What You'll Find

Cave also looks at programming at IMTS, citing the purchase of software from BobCAD-CAM (IMTS booth: 133125) at the show.

But great as new controls and software are, what I love most about IMTS are metal cutting technology demonstrations. You'll see actual machining and just different ways of doing things,” he says.

One of Cave's favorite memories – and one of the most talked about IMTS exhibits ever – was the Giddings & Lewis Variax Hexapod Mill (see this classic video). Demonstrated at IMTS 1994, the six-legged Variax was an early attempt at multi-axis machining. Although fast, the Variax was expensive, complicated and the concept didn't catch on, says Cave dryly.

One of the products that did catch on at KCM is the FlexArm pneumatic tapping arm from Flex Machine Tools (IMTS booth: 236430). Cave saw a demonstration of how adding a FlexArm to a work cell improved tapping productivity compared to having a CNC do the tapping.

We never knew such a machine existed until IMTS, and they're made 70 miles from our location,” says Cave.

In addition to connecting with his favorite control companies at IMTS, Cave will also visit with other members of the Komline family at IMTS 2022. Komline-Barnes and its subsidiary Komline-Henry (IMTS booth: 121449) provide filters for coolant systems which are used in many automotive, aerospace, agriculture, and general machine tool industries.

Even though our large boring mills are a niche business, there have been a lot of different ideas that we've brought back from IMTS, from filters to coolants to cutting tools, says Cave. You get to see the demonstrations, plus there are always deals if you buy at IMTS.